LOS CAMPESINOS We Are Beautiful, We Are Doomed LP+MP3+FANZINE
*** Holy smokes! This package includes a single 180g vinyl LP, a code to download the album PLUS video content, and a fanzine with contributions from XIU XIU, GRANDADDY, MENOMENA and others.

((((( NEW ARRIVALS: CDs ))))) Cluster, the Boss, Omar Rodriguez Lopez and a bunch of other hitmakers!

THE BIRD AND THE BEE Ray Guns Are Not Just The Future CD
*** "Every bit as beguiling as their debut, the album retains its predecessor's lithe melodies and Brazilian influences, but takes its stylish, '60s pop deeper into new sonic terrain, especially the psychedelic period of the Tropicalia era."

CLUSTER Grosses Wasser CD
*** "Combining the ambient space rock of early albums on some songs with a more updated, beat-driven (dare I say space-disco?) sound on others, this is Cluster's last great album."

OMAR RODRIGUEZ LOPEZ Old Money CD
*** "Fitting comfortably between the ORL's monumental work with The Mars Volta, and The Apocalypse Inside Of An Orange, Old Money is a 10-track collection of concise rock compositions, which range from progressive to psychedelic to downright funky."

CAROLINE PEYTON Mock Up CD
*** "This 1972 album has been expanded to 14 tracks, including her three vocal cuts on the Screaming Gypsy Bandits In The Eye LP." On NUMERO/ASTERISK.

BON IVER Blood Bank 12" / CD
*** *** "BON IVER's snow-blanketed harmonies live across the seasons. Both expansive and intimate, these four songs explore the darker and lighter natures of the seasons and what they signify, and offer a dynamic glimpse into the natural energy and refined craftsmanship that characterize Justin Vernon's music."

MICROPHONES Glow Pt. 2 3xLP
*** NOW IN STOCK! Holy smokes -- it was impossible to get copies of this triple-vinyl mammoth!! This is the reissued deluxe version of this mighty, mighty album. Don't sleep!

A.C. NEWMAN Get Guilty LP+MP3 / CD
*** *** "The second solo album from A.C. Newman, leader and songwriter behind The New Pornographers, finds the pop songsmith in decidedly more upbeat and guitar-heavy form than the last NPs album. An irresistible set of layered pop
songs of great melodic and lyrical depth."

ANIMAL COLLECTIVE Merriweather Post Pavilion CD
*** Perhaps you've heard of these gents. Do the words "ALBUM OF THE DECADE" mean anything to you!?!?!?!?

ANTONY & THE JOHNSONS The Crying Light CD
*** "Bridging the gap between avant-classical music and the blues, the intimacy of the Johnsons' sound is enveloped by avant-classical composer Nico Muhly's symphonic arrangements. "The Crying Light" is a soul-stirring new work with its daring compositions and captivating vocal performances. Antony and the Johnsons have created a subtle and timely work that brings a magical and yet changing world to the forefront of our consciousness.

JAMES BLACKSHAW Litany Of Echoes CD
*** A young guitar English player once more so in the tradition of John Fahey/Basho/etc. now sports a Steve Reich-ian/Phil Glass bent. Highly recommended by all sorts of people, not least of all is Pitchfork.

BON IVER Blood Bank 12" / CD
*** "BON IVER's snow-blanketed harmonies live across the seasons. Both expansive and intimate, these four songs explore the darker and lighter natures of the seasons and what they signify, and offer a dynamic glimpse into the natural energy and refined craftsmanship that characterize Justin Vernon's music."

HAUSCHKA Ferndorf CD
*** "Where Volker Bertelmann's previous album comprised primarily solo recordings of Bertelmann and his prepared piano (with a few electronic and instrumental overdubs), Ferndorf is a more expansive and fully-realized effort."

DAMIEN JURADO Caught In The Trees CD
*** BACK IN STOCK!

MONKEY Journey To The West CD
*** GORILLAZ side project.

A.C. NEWMAN Get Guilty LP+MP3 / CD
*** "The second solo album from A.C. Newman, leader and songwriter behind The New Pornographers, finds the pop songsmith in decidedly more upbeat and guitar-heavy form than the last NPs album. An irresistible set of layered pop
songs of great melodic and lyrical depth."

NORTH MISSISSIPPI ALLSTARS Do It Like We Used To Do 2xCD+DVD
*** New!

LOU REED Berlin: Live @ St. Ann's 2xLP / CD
*** "Lou Reed recorded the album Berlin in 1973. It was a commercial failure.
For five nights in December 2006 at St. Ann's Warehouse Brooklyn, Lou Reed performed his master work about love's dark sisters; jealousy, rage and loss and was made a film by Julian Schnabel."

TITUS ANDRONICUS The Airing Of Grievances CD
*** "Written during a particularly crucial time in any young person's life, TA launches insights across a wall of defiant, triumphant rock anthems, which have earned comparisons to such iconoclasts as the Pogues, and The Replacements."

THOM YORKE The Eraser Rmxs CD
*** "Previously available on highly limited 12" singles these remixes are now available for a limited time on CD. Featuring remixes by BURIAL, FOURTET, and THE BUG among others."

GANDALF Gandalf LP
*** Attractive baroque-psychedelia with a spacey air, often quite weird. The material is a mix of covers (TIM HARDIN) and originals on the cusp between rock, progressive-rock, and psychedelia.
Posted by John @ Wazoo at 12:39 PM

THE FALL Imperial Wax Solvent CD
*** Import-only 2008 album by The Fall finally in-stock -- one of the best-received Fall albums in years.

THE WEEK THAT WAS The Week That Was CD
*** "The Week That Was emerged from an imagined crime thriller dreamt up by FIELD MUSIC's Brewis and inspired by Paul Auster's labyrinthine storytelling. Musically the record is an expansive tribute, paying direct (and indirect) homage to the wildly ambitious Linn Drum and Fairlight experiments of Gabriel, and Tin Drum-era Japan." 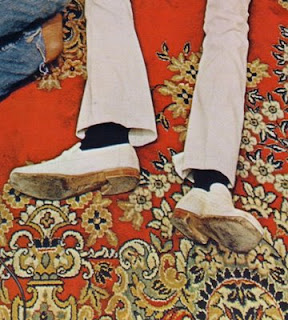 Email ThisBlogThis!Share to TwitterShare to FacebookShare to Pinterest
Labels: News

(( RECOMMENDED )) Former-Q and not U fellow! Soon after the passing of Dischord's late/great Q And Not U, Chris Richards holed up with Canadian electronic composer, Tim Hecker, and recorded a collection of primarily acoustic tunes. Some of Q And Not U's rough edges have been smoothed away and replaced with subtle textures provided by Hecker. Following a somewhat spotty final album with his former band, Richards more than makes up for it with this strong debut.