THE PORTABLE FEBRUARY by David Berman BOOK
*** "DAVID BERMAN has spent the last two decades in the public eye, stalking out his own territory as the leader of the rock band SILVER JEWS as well as poet and writer of the book Actual Air. In both cases, his address to the world has been marked with a singular touch; a literate, yet low-budget approach to communicating the beauty and absurdity of Earth-based life. The Portable February is a cheaply-priced but handsomely appointed hardcover compendium of the Berman visual sensibility: a left-handed, child-like scrawl, scored with a wit and observation that confutes the often primitive nature of his line. As the artist himself put it, 'The drawings are pitched into some rudimentary space of public art, a place we might think of as between and below Gary Larson and Raymond Pettibon.' Hardcover book, 97 pages.
Posted by John @ Wazoo at 12:44 PM

FUGAZI Instrument DVD
*** BACK IN STOCK!

SIX ORGANS OF ADMITTANCE Luminous Night LP / CD
*** *** RECOMMENDED "Through dark days and glowing nights, new horizons are visible throughout Luminous Night. Be it in the face of spiritual crisis or catharsis, BEN CHASNY refuses to stagnate, or to evolve in predictable fashion."
Posted by John @ Wazoo at 12:42 PM

BACHELORETTE My Electric Family CD
*** "Bachelorette’s music beams to us through a universe of unconquered psychedelic pop, where long beams of sunlight extend to infinity, and blue moons shimmer in an acousto-synthetic haze."

DEL CLOSE & JOHN BRENT How To Speak Hip CD
*** "The 1959 'didactic tool to be used by the listener to learn the secret language of the 'hipster'. As a parody of language-learning tools, the album presents basic concepts such as "cool" and "uncool," as well as vocabulary building ("dig", "dig it", "dig yourself, baby", "dig the chick", "dig the cat", "What a drag!"). However, the hipster rebels against participating in the teaching tool, leading to a humorously compromised teaching style."

DRIVE-BY TRUCKERS Live From Austin City Limits CD+DVD
*** "Entire performance on both CD and DVD -- over an hour on each disc."

FLORENCE & THE MACHINE Lungs CD
*** "With several strong singles taking up a fair portion of this debut release, it's clear that Florence Welch is as much a pop writer as she is a left-field artist, tempered by an admiration for soul and contemporary indie."

MARK FOSSON The Lost Takoma Sessions CD
*** "A first-time release of MARK FOSSON’s unissued 1977 sessions recorded for Takoma and produced by JOHN FAHEY. Fosson’s sound is light, smooth, and melodious, and he plays with his own individual personality."

SIX ORGANS OF ADMITTANCE Luminous Night LP / CD
*** RECOMMENDED "Through dark days and glowing nights, new horizons are visible throughout Luminous Night. Be it in the face of spiritual crisis or catharsis, BEN CHASNY refuses to stagnate, or to evolve in predictable fashion."

YAHOWHA 13 Magnificence In The Memory CD
*** "New jam from the Source Family vaults runs the gamut of a rainbow of styles, riffs & grooves sounding like German prog bands, psychedelic rock bands or the as-yet-uncreated avant sounds from the indie rock movement."
Posted by John @ Wazoo at 12:31 PM

THE BREEDERS @ Stormy Records!! - Friday, August 14
*** The same day they play the Crofoot, THE BREEDERS will do a little meet & greet / in-store signing at Dearborn's Stormy Records! They won't be there long, maybe an hour, so make sure you don't miss them. Windy & Carl are honored to welcome the breeders into their shop and introduce them in person to so many nice folks. The Breeders will have tour merch for sale while they are in the shop, and posters, etc., for signing. Stormy is located between Schaefer and Wyoming, on the north side of the streeet, in the upper level of Green Brain Comics.
13210 Michigan Ave., Dearborn / 2PM / free / ALL AGES 313-581-9322
Posted by John @ Wazoo at 10:14 AM

AMON DUUL II Yeti 2xLP
*** NOW ON VINYL! Wicked, insane reissue of Amon Duul II's great Yeti album on double-vinyl. Don't sleep on it! Methinks it's a limited one.
Posted by John @ Wazoo at 10:13 AM

AMANDA BLANK I Love You CD
*** "From racy rap records to deeply moving electro-pop songs to records that channel Blondie and the Beasties at the same time, Blank's debut is a post-modern, subversive pop masterpiece."

BLUES CONTROL Local Flavor CD
*** RECOMMENDED "Fantastic newest shimmer from Blues Control. A touch of boogie rock has penetrated their beauteous extrapolations into the miasmic core of psychedelia and billowing fog of ambient space." So good!

BLUR A Beginner's Guide To Blue 2xCD
*** 25 of Blur's best songs, scrapping some of the hits and showcasing their artier side.

JAMES LAVELLE Global Underground 37: Bangkok 2xCD
*** "An eclectic, psychedelic rainbow of sound, dazzling with colour. A spectrum of some of the most exciting sounds in electronic music today. Lavelle's finest mix to date!"

SOFT MACHINE Fourth/Fifth CD
SOFT MACHINE Six/Seven 2xCD
*** Dang! These guys rule. Is it jazz? Not-jazz? What is it!?! It's brilliance, that's what it is. And what's better than one Soft Machine album? How about two? Two in one package? Sure. Four in two packages? Yes, yeah, totally. 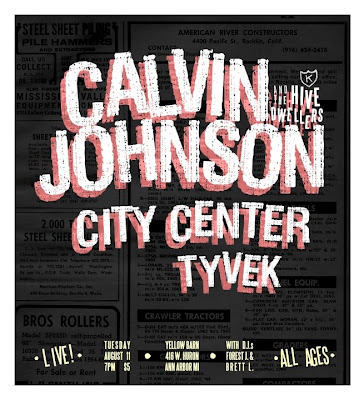 THE DEAD WEATHER Hang You From The Heavens 7"
*** Everybody wants this thing so we got this thing.

JAMES PANTS & EGYPTIAN LOVER Cosmic Rapp 12"
*** BACK IN STOCK! This thing has been flying out of here. Serious best-selling 12" here.

JONSI & ALEX Riceboy Sleeps CD
*** "The instrumental side project from SIGUR ROS member Jon Thor Birgisson and collaborator Alex Somers. Riceboy Sleeps is human in a profound and verging-on spiritual way. Its slowly evolving abstract landscapes are both edifying and life-affirming, existing in a contemplative dream-state, unconstrained and mesmeric, seemingly outside time."

MEDESKI MARTIN & WOOD Radiolarians 3 CD
*** "The third and final installment in their Radiolarians trilogy, maybe the strongest and most cohesive album of the Radiolarian's series."

MODEST MOUSE No One's First & You're Next CD
*** "A collection of newly recorded songs from the We Were Dead Before the Ship Even Sank and Good News for People Who Love Bad News sessions, as well as two rare b-sides."

THE OCTOPUS PROJECT Golden Beds CD
*** "Five different tunes from five different rooms of the neon mansion the band has built - from big-riff Rock to tiny electronics to blissful sing-alongs. Dip your arms deep into a kaleidoscopic candy jar filled with tasty Octopus-flavored treats." There are a whole bunch of videos on here too.

JULIAN PLENTI ...is Skyscraper CD
*** A.K.A. Paul Banks of INTERPOL. "This incredibly varied album runs the gamut from gorgeous folk-tinged acoustic songs to huge, orchestral guitar anthems. The palette changes from black and white to color and back, from regal Eastern European synth sounds to sad but triumphant brass."
Posted by John @ Wazoo at 10:33 AM