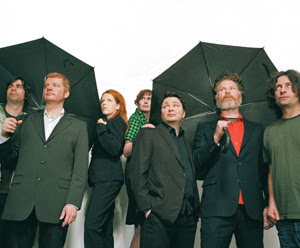 We haven't figured out the drum roll sound effects (sorry), and presenting the upcoming 4th album from the New Pornographers, 'Challengers' surely requires special effects that would make Michael Bay dizzy. So if you wanna hear a strong candidate for 2007's Album Of The Year more than 2 months before street date, here's your big chance:

TWO VERSIONS TO CHOOSE FROM: "EXECUTIVE EDITION" AND "STANDARD EDITION". As usual, this Buy Early, Get Now preorder is available from a select group of physical and online retailers, listed here Or, you can order direct from Matador.

When you preorder the album with one of them, not only do you reserve a copy of "Challengers," for release date, there's mo' mo' mo'.

Challengers: Executive Edition (list price $19.99)
* You Get It All + an exclusive, limited edition, CD/CD-R Box Set.
*Full Album Stream (available within days of your purchase)
*The Challengers Box-Set A very limited edition Treasury of New Pornography available only to Executive members. Includes three bonus CD-Rs, designed in a deluxe box set package bonus discs.Disc One: B-Sides, Demos and Alternate MixesDisc Two: The New Pornographers "Live From The Future"
Disc Three: Videos, photos and artwork(note: you will download all of this material digitally as part of Buy Early Get Now, so some-assembly is required as some of these recordings haven't even happened yet.)
*Advance notice and exclusive ticket buying links for upcoming New Pornographers dates
*Anything extra that we can scheme up between now and the end of the world.

Challengers: The Standard (Cheapskate) Edition (list price 14.99)
Everything except the box set, the live disc, videos, photos and artwork.
*Full Album Stream Listen to all of Challengers more than 2 months ahead of release
*3 previously unreleased B-Sides
*Advance notice and exclusive ticket buy links for upcoming New Pornographers dates speaking of which, there's a bunch of New Pornographers shows that are 4-real-confirmed. And if you'd like a crack at purchasing tickets a week before the general public, your participation in the 'Challengers' portion of Buy Early, Get Now will allow you to do so starting tomorrow.